Grome’s Sewing Machine Company is dedicated to the growth, support, and service of the sewing community. Our company is here to provide sewers, quilters and embroidery enthusiasts with educational services, sewing machine care, and quality sewing products.


Gromes Sewing is a family owned and family operated business

Grome's Sewing is lead by four time retired grandfather Richard Grome, Our team also includes daughters in charge Cyndi and Irma with a supporting cast, his son Robert, his son-in-law Curtis and his grandson Manuel


From our family to yours we would also like to say,
“Thank You and God Bless You.”


In 1978 when our building was constructed we stood alone on Top of the Hill on Manitou.

Today we are surround by the Summit Tower South, Red MCcombs,
the Hampton Inn and Marie Calendars.

So to find us take 410 and turn south on to Callaghan. Go 1 block and turn right at the Valero onto Manitou. Grome's is the second business on the right. 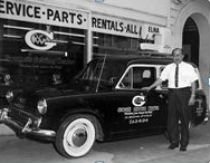 
Grome’s Sewing Machine Company is dedicated to the growth, support, and service of the sewing community. Our company is here to provide quality sewing products and services.